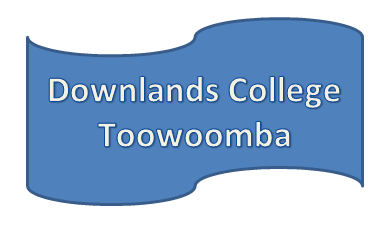 R. Sinclair and Co. announce by advertisement that "Tyson Manor." Toowoomba, with 70 acres of land, for many years occupied by Mrs. J. Tyson Doneley, and also the whole of the household furniture and effects, will be sold by auction on the premises on Thursday, May 6.

"Tyson Manor" is situated in the north eastern portion of Toowoomba, in a commanding position, which gives it magnificent panoramic view of Toowoomba and suburbs. 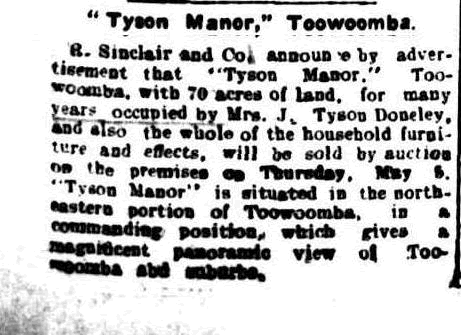 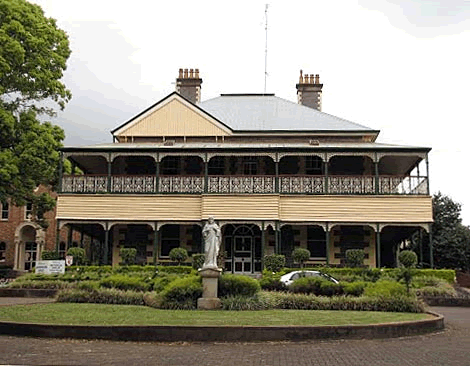 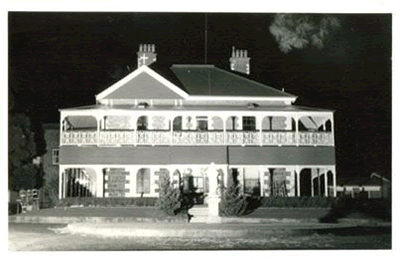 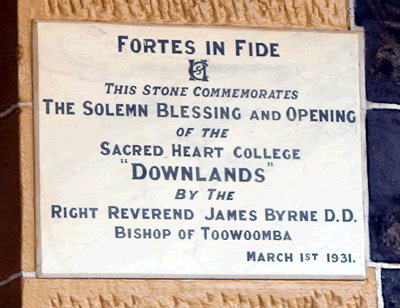 This is the second annual magazine of the Sacred Heart College, Downlands, Toowoomba, and a more artistic school magazine it has not been our fortune to see. The paper, the letter- press, and the numerous illustrations in brown-toned blocks, are all first class, and a credit to the local printers. The college is only two years old, but has as its chief building the old Tyson Manor, built over 50 years ago for Mrs. Matthewson, a sister of Lady Nelson, and known as Strathmore. In 1902 it passed into the hands of Mr. Tyson Donnelly, and became Tyson Manor, in honour of Mr. Donnelly's pastoral relative, the renowned millionaire, "Jimmy" Tyson. In 1921 the property, which has been enlarged and beautified, passed into the hands of Dr. Alex. Horn, who gave 30 acres of it as a public park to Toowoomba, and sold other areas. The remainder, a very substantial block of land with the historic manor, has passed into the possession of the Catholic community, who have named It Downlands College, having added to it a chapel, dormitory block, with kitchen, dining-room, and an executive block. The college stands 2000ft. above sea level, with commanding views of Toowoomba and its neighbourhood, two miles away. The college is purely a residential college

One feature of the college is its "lyceum," so named from Aristotle's academy In Athens. It combines the functions of a literary and debating society, and aims fundamentally at well-spoken and unaffected English, "The average boy has a passionate attachment for the ordinary, and feels that to be in any way different, and especially to speak differently, is either an insult to brptherly equality or a betrayal of some mistaken conception of masculinity. Affected speech is ludicrous. Correct speech may seem laughable to some, but it is always better to 'make the unskilful laugh than the judicious grieve.' At Downlands censors are appointed to criticise each speech, and then the Patron sums up, criticising both censors and censored. So constructive work Is done The Patron has a genial Irony. Of the debates he says "Contrarieties or con- tradictories in successive sentences are magnificently ignored. Witticism is supposed to stand for proof. A proposition, however well disposed of, may be used repeatedly: and the tu quoque and the louder voice are conceived - as controversy's subtler weapons." The review of the Downlands sporting activities reveal that these boys keep up the Toowoomba reputation for athletics, including cricket, football, and tennis. To this last they were coached by Duncan Thompson, and though a small and new school, Downlands had three finalists in the all schools' tournpy, one of them, A. Macfarlane, the son of a Pittsworth lady who for many vears as Miss Macintosh, was champion of Queensland. 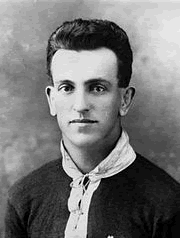 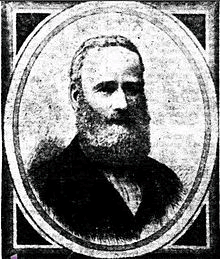 James Tyson (8 April 1819 - 4 December 1898) was an Australian pastoralist. He is regarded as Australia's first self-made millionaire. His name became a byword for reticence, wealth and astute dealing. 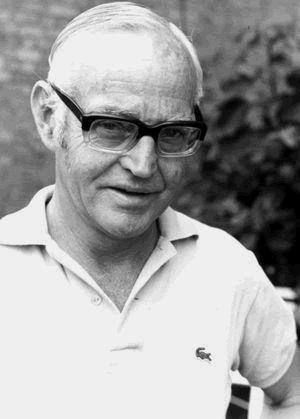 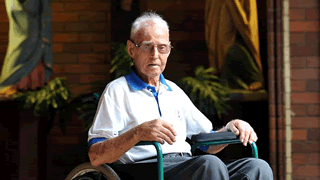 "My name is Tyson Doneley; I am my Uncle Tyson’s eldest nephew. His father and grandfather were both known as Tyson, as is my son and his eldest son. The Tyson name has been associated with the Doneley family since 1827 when George Doneley married Isabella Tyson.

The name lives on. Ignatius Tyson Doneley was born on 5th Jan 1921, in Toowoomba, the second youngest of the children, of Aloysius Reginald Tyson Doneley and his wife Minnie nee McGlynn. His 6 siblings were Bernie (my father) Frances Marchant, Marie, Joan Conrad, Camille Marchant, and Glynn.

His primary schooling was at the Marist Brothers College, Rosalie, in Brisbane, where he excelled at an early age in his studies and sports and from where he was awarded the St Joseph’s Old Boys scholarship to complete his secondary studies at Hunters Hill. His father had been a student at St Josephs in the late 1890’s. Cricket was his favourite sport. On his first day at Joeys he was told to report to the 1st XI practice nets. He had only just turned 15. He played a large part in the 1st XI’s 1937 premiership win heading both the batting and bowling averages, and played 5/8 in the premiership winning 1st XV in the same year Tyson’s first contact with the MSCs was when he saw a large church spire on a distant sand hill, while playing cricket in Centennial Park. The Sydney High keeper told him it was a Monastery and Uncle Tyse thought it might have been the Marists whom he had considered joining, and when he subsequently visited there he met 2 former Marist Old Boys, by now MSC priests, Fr Bill Graham and Fr John Tyler, who convinced him to join the MSC’s. He recalled each time he drove by the park that on that day in April 1937 that he took 4 for 26 contributing to an innings win over High. Only last month on perhaps his last drive through the park he once again recounted those events of 78 years ago. Large trees now obscure the view of the monastery.

In his leaving certificate he secured three honours, five A’s and one B. Foregoing a scholarship to Sydney University he entered the MSC Novitiate at St Mary’s Towers, Douglas Park in 1938 completing his theological studies at the Sacred Heart College, Croydon;

He was one of 21 seminarians ordained by Archbishop Mannix in St Patrick’s Cathedral Melbourne in July 1946 including 7 other MSCs from Croydon, Frs. G. P. Church, M.McPhillamy. W. J. Ryan. A. J.Sheridan, J. Savage, M. Atchison, B. J. Scrivener

After his ordination he returned to Kensington to attend Sydney University gaining a BA majoring in Latin, in 1950

Subsequently while teaching at Downlands he secured a B Ed (UQ) 1957 and was awarded a MA (Sydney) in 1960, his thesis being “Two literary epics: a comparison of the Aeneid with Paradise Lost”

With these qualifications Uncle Tyse was destined to be a teacher, and coach, first at Downlands, then Chevalier, Princethorpe, Rugby, England, Monivae, and St Johns’ Darwin where he was Principal at the time of cyclone Tracey. In 1953 while sports master at Downlands he decided to take up club cricket, as he said, only because of all his cricket practice with the students. He became a regular player for Toowoomba, a sound all rounder, and was being considered in some circles a possible Sheffield Shield selection, perhaps even worthy of an Australian cap.

During school holidays he relieved as parish priest in many country towns and at Christmas he would often join his family for the holidays at Broadbeach where his parents had a holiday home.

In 1980 after 39 years a teacher, he retired and was then able to pursue his early ambition to be a missionary. Like the early apostles he travelled widely in his ministry. His first posting was to the Mission at Vunapope New Britain, then to Nagoya Japan, After a spiritual renewal course in Chicago and the Holy Land in 1989 he spent the next 10 years at the new seminary in Kanjoor in Kerala and Bangalore in his beloved India, leaving every six months, in order to renew his visa, taking the opportunity to return home temporarily or to visit neighbouring countries His last missionary assignments were to Indonesia and Fiji

Retiring again in 2003 after 23 years as a missionary he came back once more to Downlands. Health concerns resulting from an oesophagectomy in 2003 and the onset of Parkinson’s disease compelled him to relocate to the Monastery at Kensington and as his medical condition deteriorated he was admitted to St Joseph’s Nursing home for Religious here at Kensington where he was lovingly cared for by the Sisters and nursing staff until his death. We were very proud of Uncle Tyse being awarded the medal in the Order of Australia in 2013, for service through Catholic educational organisations.

For our family he was a very special person, He was Uncle Tyse to all his 29 nieces and nephews and 55 grand nieces and nephews and numerous great grand nieces and nephews He was always a welcome guest in our homes on birthdays and similar occasions. He was always good for a game of tennis, frequently defeating some of the younger generation He was our family’s own priest Celebrating Mass in our homes Conducting many Baptisms Officiating at numerous Marriages Conducting funerals not only of his own parents but also his brothers and sisters and other family members.

He was a friend to all Uncle Tyson was a sociable and affable person interested in every one he met and in their lives. He made each person feel they were special to him in some way.

He was a private, humble and modest man with no earthly possessions apart from the clothes he wore and an old putter and a few golf balls he kept in his room, but he had a wealth of memories from a life full of challenges and achievements. He was a friendly companion to his brothers and sisters in religion. Mentor to many Caring priest Gifted Teacher Sportsman Confidant, In a word he was a wonderful PERSON

On the evening of Sunday 19th July as the light was fading his captain declared his innings over at 94, not bad for a leg spinner? From a life of teaching and preaching throughout Australia and a wide expanse of the world he always came back to his roots. His parents took him to Tyson Manor in Toowoomba as a newborn child, then his grandfather’s home. He returned to the Manor again in 1950, which had by then become the priest’s residence of Downlands and where it remains as such today.

He returned again to spend his last years in the Monastery at Kensington where he had first contacted the MSC’s in 1937, and stayed in the same room he first occupied during his Sydney University days.

Today he is returning to St Mary’s Towers, Douglas Park where he began his priestly studies 77 years ago, only a few kilometres from Appin where the first Doneleys settled in 1798. His final wish was to be with his Saviour in Heaven and be laid to rest in the grounds of the spiritual home of the MSC community, the last resting place for just over two hundred members of the province. Farewell Uncle Tyse. We all will indeed sorely miss you but will always lovingly remember you